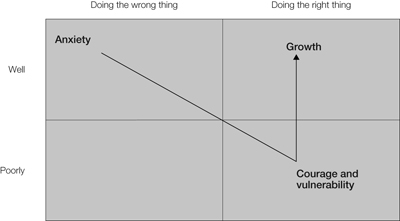 I was halfway through reading the book Flying Without a Net by Thomas J. when I came across the following brilliant insight: in order to improve a particular skill, we have to first start by recognising that however we are performing that skill may not be the best way of doing so, and that to improve some changes may need to be made.

DeLong used the story of Tiger Woods to illustrate this idea very well:

Tiger Woods won the 1997 Masters Tournament in Augusta, Georgia, by twelve strokes. It was such an overwhelming victory that Augusta National redesigned its course to increase the odds that Woods would not repeat the feat. Yet after woods won the tournament, his coach, Butch Harmon, told him that, while he had played superb golf for four days he had a problem with his swing. He suggested that Woods needed to rebuild his wing from the ground up. Harmon admitted that woods could win sporadically without a change but would never challenge the greats like Jack Nicklaus.

I remember that incident well. Back in the late 90’s, Woods was a rising superstar. Being young and extremely dominant in the sport of golf he single-handedly made golf “cool” — and like many other younger golf fans, I started watching golf because of him.

When Harmon made those comments, many sports journalists were critical. Changing a winning formula? You got to be kidding!

I, too, felt that change was the last thing Woods needed.

In the months that followed it seemed as if the changes that Woods was making did more harm than good, and I wondered when he was going to say, in effect, “screw it!”, and get back to playing great golf again.

He soldiered on and went on to win a great many more tournaments, becoming even better than before. (Until his relatively recent marital problems, which has had a detrimental effect on his performance and career.)

Here’s the diagram that DeLong shared in the book:

Sometimes, the outcomes from doing these “wrong” things aren’t that bad. But in this context, we’re really looking at peak performance. Often, we know that the outcome may not be optimal, and we suffer anxiety because we fear we’re losing our edge.

In order to get to the quadrant of “doing the right thing well”, i.e. the top-right, we have to move down to doing the right thing poorly. This is where it takes “courage and vulnerability”. When we first start changing the things we do, we’re probably not going to be particularly great at it.

We’re going to need to ignore the naysayers and just grind it out, continually practising our new behaviours. Eventually, all that practice will lead us to start performing these right things well.

The problem many of us have is that when we’re doing the wrong thing well, and getting results that may not necessarily be considered “poor”, changing isn’t always easy. The courage and drive to want to get into the next level of performance needs to be stronger than the anxieties we may face to maintain the status quo, especially since short-term results are likely to be poorer.

I did some analysis on my life through my writings from the early 2000’s till present, both personal and public, to see if I had encountered this anxiety-regression-progression movement, and I found that I had.

Whenever I’m trying something radically new like starting my national service in the army,  studying overseas, starting my Master’s degree, changing jobs, getting married, or having a child, I’m always in a state of high anxiety.

During this period I’m constantly asking myself if this is the life I want, wondering what’s going to happen, or second-guessing my job or university choice. What follows though, if I lean into these challenges or life changes, are often periods of my greatest personal and professional growth.

The things I fear the most often turn out to be the very things that shape who I become.

(PS: If you’re interested in Woods, read also this article on swing changes that Tiger Woods had made over the years. The “Harmon” change wasn’t the only one.)